It is a bit of a tall order to sit down and write the story thirty-seven years afterwards, but happily I never throw anything away, so the barograph trace and the photos are still there. And even a calibration trace: so with a thorough analysis (and the bit of memory I have left) I can work out pretty closely where I was during most of the flight, and of course how high, often the crucial point in Irish gliding.

The morning was clear, bright, and dry: and we were at Kilkenny for a week of competition. Not that easy, with so few gliders and pilots available, but we were going to do our best, and Stanley Dunne was there to set the tasks. Stanley was both enthusiastic and optimistic, and felt that the open class (just me, actually) should try to do something really worthwhile. I don’t know if he believed it was possible – but the important thing was that he convinced me …

So I took a photo of the task board, and set off towards the West. Or so I have always thought of it, but the heading was really south-west, following a track about fifty kilometres from the south coast, with a turnpoint at Barraduff, a few kilometres into Co. Kerry and some twenty kilometres south-east of Farranfore.

The aerotow release was at 2050 ft asl (about 1800 ft agl), and I tiptoed along between 2100 and 2900 ft for the first 25 km or so, with a long descent over the low ground east of Cahir. An hour into the flight came a low point of 1800 ft, but a short distance beyond the town I found a welcome thermal which took me up to nearly 2700 ft at the east end of the Galtee mountains.

I continued along the south side of the Galtees, with a gentle glide to Mitchelstown, where I took a couple of photos. No reason that I can remember for that; perhaps just because it was there. After an hour and forty minutes of flying I found a thermal to the west of Mitchelstown which went to 3300 ft, and thirty minutes later was in one near Buttevant, which gave 3500 ft.

West of Buttevant the ground becomes higher and the following climb was to 3700 ft, being followed by another glide and then thirty minutes cruising at fairly constant height. Everything seemed to be going well and the turnpoint was within reach, when 11-12 km short of it and at around 3500 ft I broke through a sea-breeze front into clear air with dazzling visibility all the way to the Atlantic – but doubtless without the slightest thermal.

Still, having come this far there was no alternative but to go for it, so go I did; to take my photos and then glide back towards the clouds, still visible but now on the wrong side of the front. The first of the photos seems to have been taken into the sun on the approach to the turnpoint, but one can still pick out Lough Leane, with Killarney on it’s nearer shore and the outline of Carrantuohill beyond. 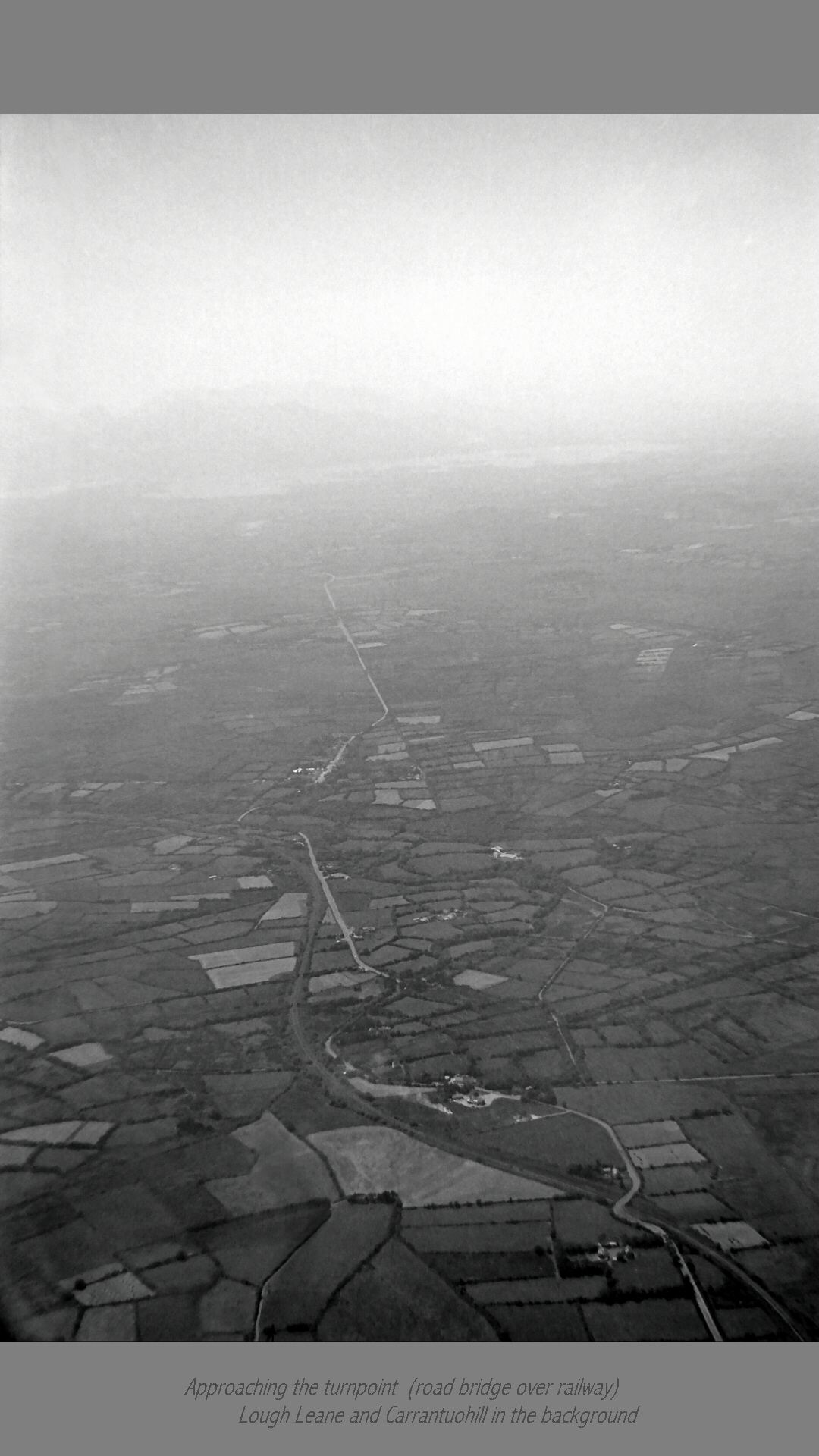 I don’t know quite why I went on so far to take the turnpoint photo – I am two and a half kilometres beyond the road-railway bridge which was the target. Perhaps to include the very distinctive curves of the railway line at this point, but if so it was not without risk. For the few extra kilometres flown made the return to the clouds all the more nail-biting, and produced another low point, of 1850 ft – but this time the ground was a lot higher and I was a good deal closer to it, not much more than 1200 ft agl.

However the trace shows that the first thermal I found worked well within a few moments, and I was back in business again, climbing back to 4200 ft over the next few minutes. I can recall heaving a big sigh of relief …   This thermal and the next two gave the best climb rates of the flight – they seem to average over five knots if only for a couple of minutes at a time, not that we had such a thing as an averager in those days.

A little more than four hours into the flight I was south of Rath Luirc (Charleville), having followed the higher ground further to the north, and shortly afterwards took a thermal to 4700 ft near the Ballyhoura hills, which lead towards the west end of the Galtee mountains. After a further twenty minutes of glide, and four and a half hours of flying, I was about twenty kilometres to the south and west of Tipperary, not far from Galtymore and in a thermal which topped out at 4550 ft.

This was around half-way home, and as height was no longer an immediate problem, I began to focus as much on the goal as on what was below. From the trace I believe that I then followed the Galtee mountains towards the east, passing afterwards some ten kilometres to the south of Cashel.

Just after the five hour mark (and no doubt near the east end of the Galtee mountains) came the flight’s high point with a climb to nearly 5300 ft, and from here I was on final glide towards Kilkenny. Not that I could see it, as the visibility wasn’t that good anywhere to the east of my sea-breeze front. So I did take a last thermal to 3600 ft in the Killenaule – Ballingarry area, about twenty minutes from Kilkenny, only starting a dive towards the finish line when the airfield finally came into sight a few minutes out.

I landed after five hours and fifty minutes on the task and six hours of flying: but other gliders were still airborne for the best part of an hour after my landing, as I recall. It really was an exceptional day.

This was my first 300, so just staying up to complete it was far more important to me than speed. A longer flight may well have been possible by adding a second turnpoint and flying a bit faster on the way back. No regrets though, it was far enough to give me a warm glow of achievement, without being so far as to seem unattainable. It was an honour to have been the first pilot to have flown a 300 km task in the Republic, and a pleasure to have flown it over such an attractive swathe of country.

Although the task was 303 km, which corresponds exactly to the turnpoint at the road bridge over the railway line, the distance flown to the Barraduff crossroads and back was 308 km. A turnpoint any further west than this would not have been on – indeed if I got around it unscathed I have largely the Kestrel to thank.

The Kestrel 19 was a truly excellent machine for typical Irish conditions, with its high glide angle and low sink rate, and very docile handling. True, with two flap levers and two tail parachute toggles to play with, plus rather ineffective airbrakes, one had to have one’s wits about one in a tight corner, but the performance avoided most of those.

Thinking of this flight brings back happy memories of the glider, but also of the place and of the people who made it all happen. Thanks, Stanley !

I see from my power logbook that I was pushed into the Rallye Minerva for the next couple of days to do more than thirty tows, and did fifty-five over the week; ten of them in our asthmatic Tiger Moth. In which I also visited much of Co. Kilkenny and the Clonmel gliding club’s mountain strip (a fairly tall story in itself, but for another occasion). 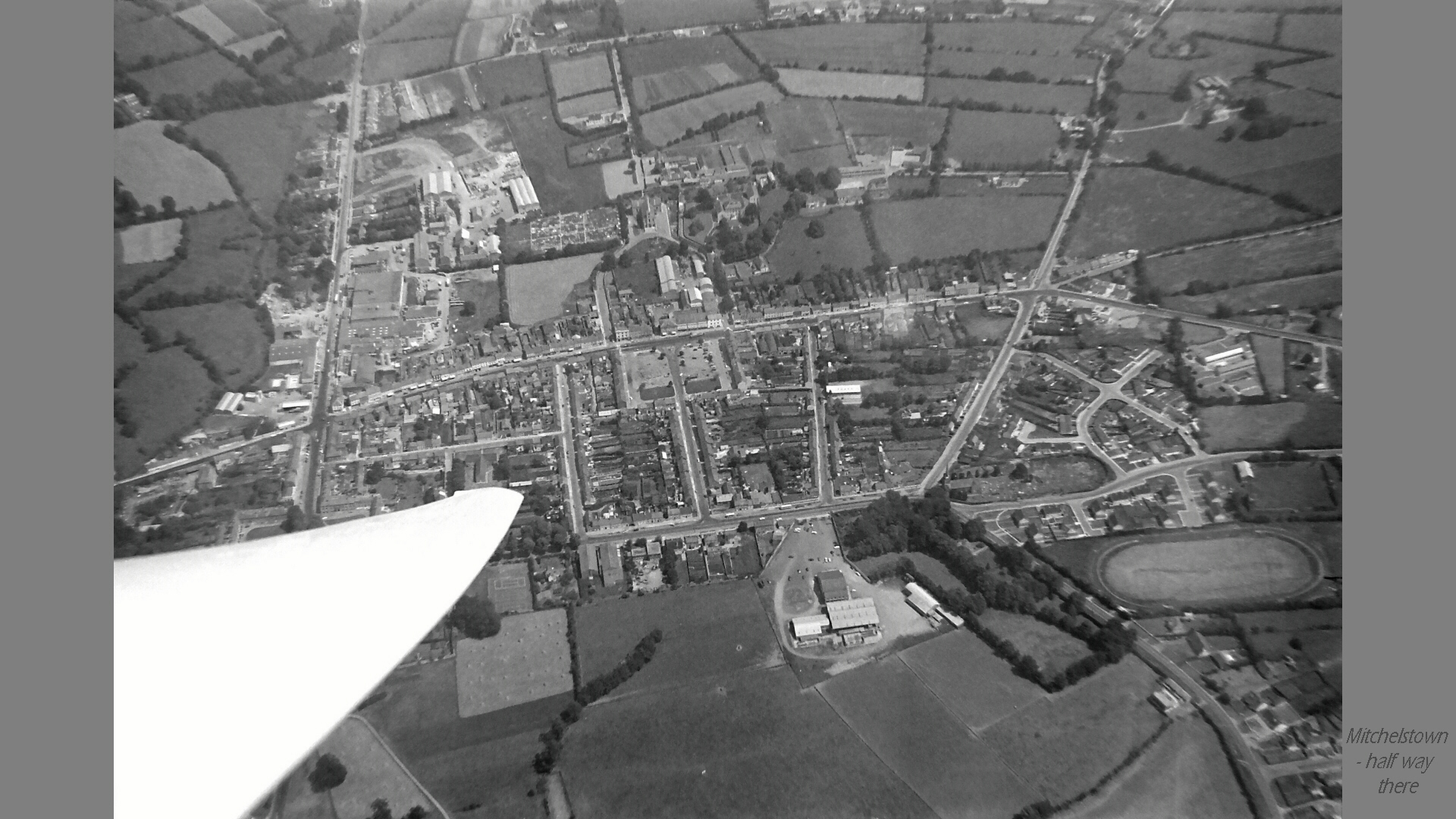